Amnesty Interantional Report 2013 - The State of the World's Human Rights 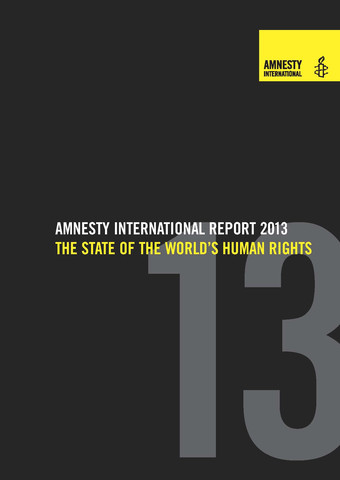 Tweet
The Amnesty International Report 2013 documents the state of human rights in 159 countries and territories during 2012. While governments paid lip service to their commitment to human rights, they continued to use national interests, national security and concerns about public security to justify violating those rights. In response, people all over the world took to the streets and explored the explosive potential of social media to expose repression, violence and injustice. Some paid a heavy price. In many countries, they faced vilification, imprisonment or violence. Individual and collective acts of courage and resistance continued to drive forward the struggle for human rights and to ensure that the actions of governments and powerful vested interests were forced into the spotlight. This report bears witness to the courage and determination of women and men in every region of the world who stood up to demand respect for their rights and to proclaim their solidarity with those whose rights were flouted. It shows how, despite all the obstacles in its path, the human rights movement is growing ever stronger and more deep-rooted, and how the hope it inspires in millions remains a powerful force for change.